What’s the best film for my home or office?

If your home or office has a glass area that allows excessive heat into the internal areas, then applying a window film can reduce the amount of heat entering through the glass and inside. While tinting rejects large amounts of heat, it may also reduce visible light (the light we need to see). But, there is a solution to this. Lighter films allow more natural light to enter through the glass. You can still create daytime privacy as well as 99% of UV protection with a lighter film, as in many cases the UV light inhibiters are in the adhesive, not the film. 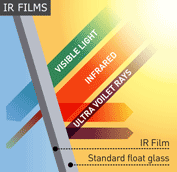 Technological advancements have led to the creation of a new range or solar control film known as IR film (infrared film) or also known as (Spectrally Selective Films). This film is revolutionising the solar control film industry because of its ability to select the type of light that they reject. IR film can reject very high amounts of infrared light (light that causes heat), while rejecting only a minimal amount of visible light. By combining IR film with an adhesive that contains UV inhibiters, it will eliminate 99%+ of the UV light which causes fading of furnishings and deterioration of electrical items like LCD and plasma televisions.

When professionally installed, these films appear virtually clear from the inside. Although it is currently quite expensive to manufacture, this film is the future of solar control technology.

When deciding on a solar control film, firstly consider the following:


1. How much light are you willing to sacrifice?

Glare and light are one and the same thing, so you must consider how much natural light you are prepared to sacrifice to reduce glare.


2. How do you want the glass to appear from the inside and outside?

Films that are commonly installed on residential glass are generally non-reflective to allow the glass to complement the aesthetics of each particular home. A reflective film is more efficient for rejecting heat, but it may not suit the exterior of a colonial home, it may however, suit a modern city apartment. It really comes down to choice. Also, dye based films will almost certainly not last as long or be as effective at reducing energy consumption, as a metal based film.

Looking for an installer?